Tackling the issue of noise pollution in smart cities

Noise pollution is the second most damaging environmental threat to human health of the modern day. This may come as a surprise to many. Sure, it can be annoying hearing the constant thrum of traffic or music from a club in the early hours, but second most dangerous? Unfortunately, it is very much the case. Indeed, even back in 2018 the World Health Organisation, estimated that up to one point six million healthy life years were being lost in Western Europe alone due to noise pollution. Three years later, taking account of all noise sources on a global basis, it’s inevitable that the situation is worse.

But how can noise be such a threat, and impact health more than simply rendering people slightly frustrated? A commonly known issue is its relationship with heightening stress, but there is far more than anxiety lurking under the hood of noise pollution. Physical effects linked to noise pollution include respiratory agitation, high blood pressure, gastritis, colitis and even heart attacks. And this isn’t even an exhaustive list. All can be caused by things as simple as planes passing overhead, daily traffic or construction work close by.

This entire phenomenon has been linked to the earliest human evolution – our brain stems having developed to kick into fight-or-flight at the slightest abnormal sound. Today, this same fight-or-flight response can be unconsciously triggered by jackhammers, trucks and cranes. Reportedly the threat is still getting worse, with recent reports stating that citizen complaints in some cities – in this case Vancouver – have doubled over the course of 2020.

If you can think back to any time in the past few years where you’ve got away from the city to somewhere quiet and found yourself weirdly on-edge at the sudden silence, it’s likely due to an overexposure to noise pollution.

We recently caught up with Rick Scholte, CEO of Sorama, a Dutch high-tech company, partner of Axis and expert in this field to talk about noise pollution. According to Rick, most smart cities who are making any attempt to deal with the rampantly growing issue of noise pollution are doing so with sub-par tech. Namely, as he called them, “dumb decibel meters”. These devices are very limited, able to tell when a certain decibel threshold is broken by something in its vicinity, but wholly unable to pinpoint its source or understand what might have been causing the specific sound.

Rick highlights another issue, that some cities are not conscious enough about noise pollution and some are even unmotivated to find out that they have issues to solve: “I knew someone who was behind some of the noise testing for a city. They’d placed a lot of these decibel meters throughout the city and found that this one particular intersection was much louder than any of the others – it displayed markedly higher readings. Unfortunately, they were unable to identify the source of the issue, and without the budget to tackle the problem they looked to avoid it altogether by moving the meter back about 500 feet for a quieter reading! Typically, you see that local government employees are struggling with how to battle noise pollution due to limited resources and knowledge or lacking support from their superiors.

“This inexact and sometimes outright misleading information is then compiled into a noise map once every five years. These maps are static, and can be bought out for construction sites, meaning they become completely out of date really quickly. The current approach to tackling noise pollution is less than optimal, to say the least.”

How should we be analyzing noise?

Acoustic sensors and monitors – such as those developed by Sorama – are the key. These smart devices function in a way comparable to a thermal imaging camera. By utilising a vast number of small high-quality microphones an acoustic sensor can create an accurate visualization of where a sound is coming from, how loud it is, at what point that volume drops off, and even more. By utilizing such technology, smart cities will be able to pinpoint the source of a particular noise, be it a construction site or an obnoxious party.

For a more specific example, let’s say that a smart city notes that every day from precisely 17.00 – 17.30 one intersection becomes a significant noise pollution problem to inhabitants that live close by. The city can identify using the acoustic sensors that this is specifically the sounds of traffic coming from a certain direction and realises that this intersection simply can’t accommodate the rush of people returning home from a day at work. A short-term solution could be simply to use this information to change the controlling of the traffic lights; giving way to the lanes that are most noisy due to heavy traffic stopping and accelerating constantly, thus optimising for best traffic flow and lowest noise load. Longer-term, intersections could be redesigned completely.

Additionally, information from acoustic sensors running 24/7 allows a smart city to create more transparent communication with its citizens, reporting on noise levels live in a similar manner to how some cites do with air quality (again Vancouver in this case). This would lead to greater accountability for city initiatives to tackle the issue, and allow citizens to check progress in relation to known noise pollution issues, or even to research areas of the city in which to live.

The additional value of integrating video surveillance with noise analytics 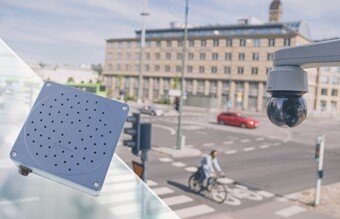 For instance, data from the acoustic sensor could automatically and accurately direct PTZ (pan, tilt, zoom) video cameras towards specific sources of noise, allowing for visual verification of an issue, and far better response time to an escalating situation. A sudden increase in noise – for example raised voices or car horns – could provide early warning of an incident before it has time to spiral, or the shattering of glass could alert the camera to a potentially robbery or vandalism.

In addition to ad hoc incidents, the additional visual data captured by video surveillance cameras over longer periods can provide additional insights into specific sources of noise pollution. Back at our busy intersection, while noise early morning might be cause by construction and delivery vehicles, in the evening it could be commuter traffic. The ability to identify in visual detail the difference in noise sources will lead to far more accurate and impactful measures to alleviate. For instance, a city authority might decide to implement priorities to accelerate the use of quieter electric vehicles for last mile deliveries, or limit the size of construction vehicles.

Such benefits can be delivered without a need to upgrade or replace existing surveillance infrastructure. Using surveillance camera networks based on open technology makes it an almost infinitely scalable solution, easy to upgrade with acoustic sensors and allowing operators to immediately start analyzing noise pollution levels and drafting a strategy.

If we want to ensure a healthy, smart and sustainable future for humanity then it’s imperative that we start being more aware of the dangers of noise pollution, and how we might combat it.